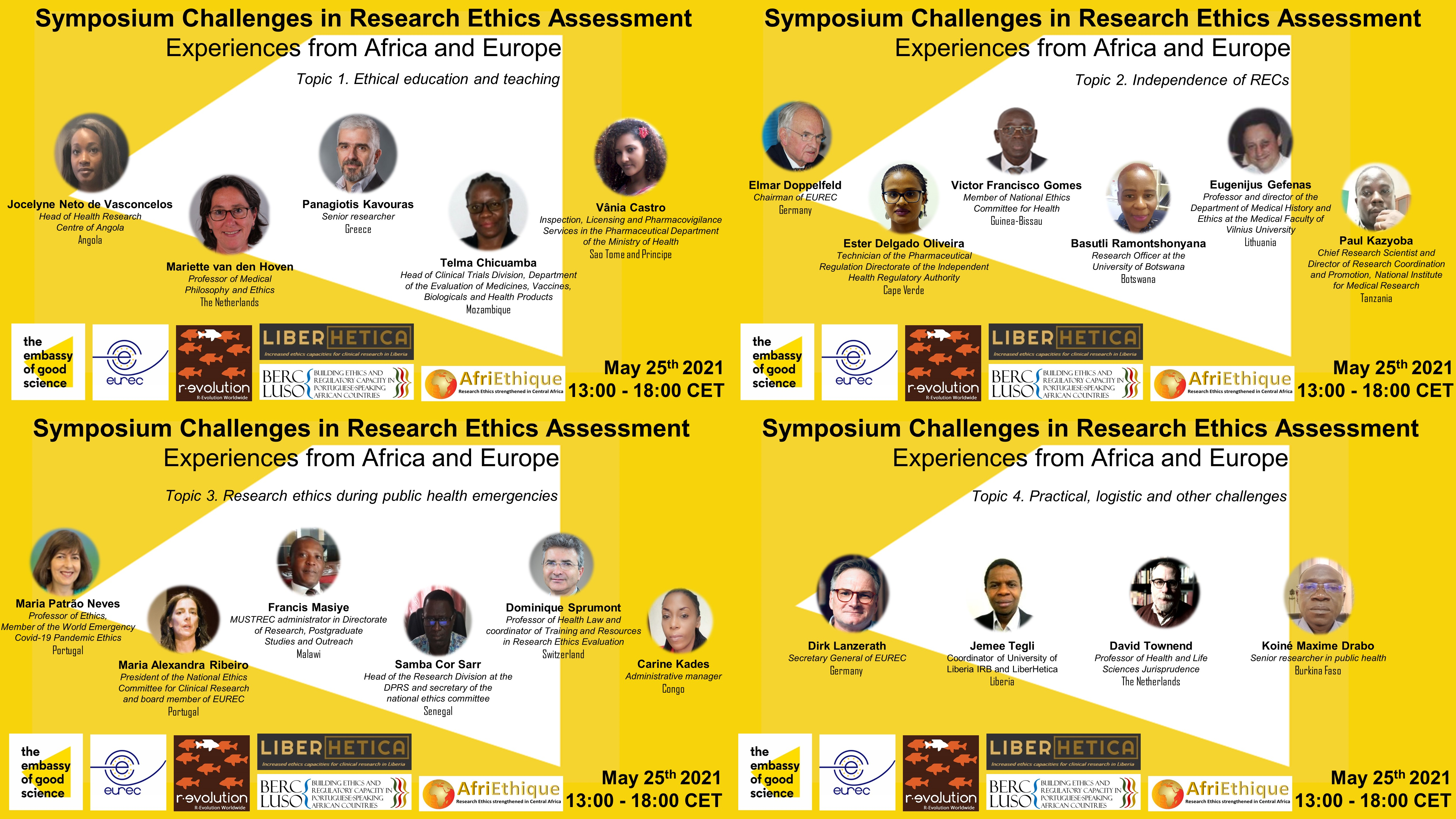 The symposium,  organised by The Embassy of Good Science, in collaboration with EUREC, BERC-Luso, AfriEthique, and LiberHetica, aims to facilitate the sharing of experiences and perspectives on research ethics assessment challenges between African and European experts. The symposium is organized into four sessions in which experts will present on challenges and solutions related to the theme of their session. A panel discussion will follow the speaker presentations.

The symposium will be live streamed here (no registration required):

On Tuesday 25th May 2021, African and European experts will present on challenges and solutions related to ethical evaluation and research infrastructures, with a particular focus on the following topics: ethical education and teaching, independence of RECs, research ethics challenges during public health emergencies, practical/logistic and other challenges. 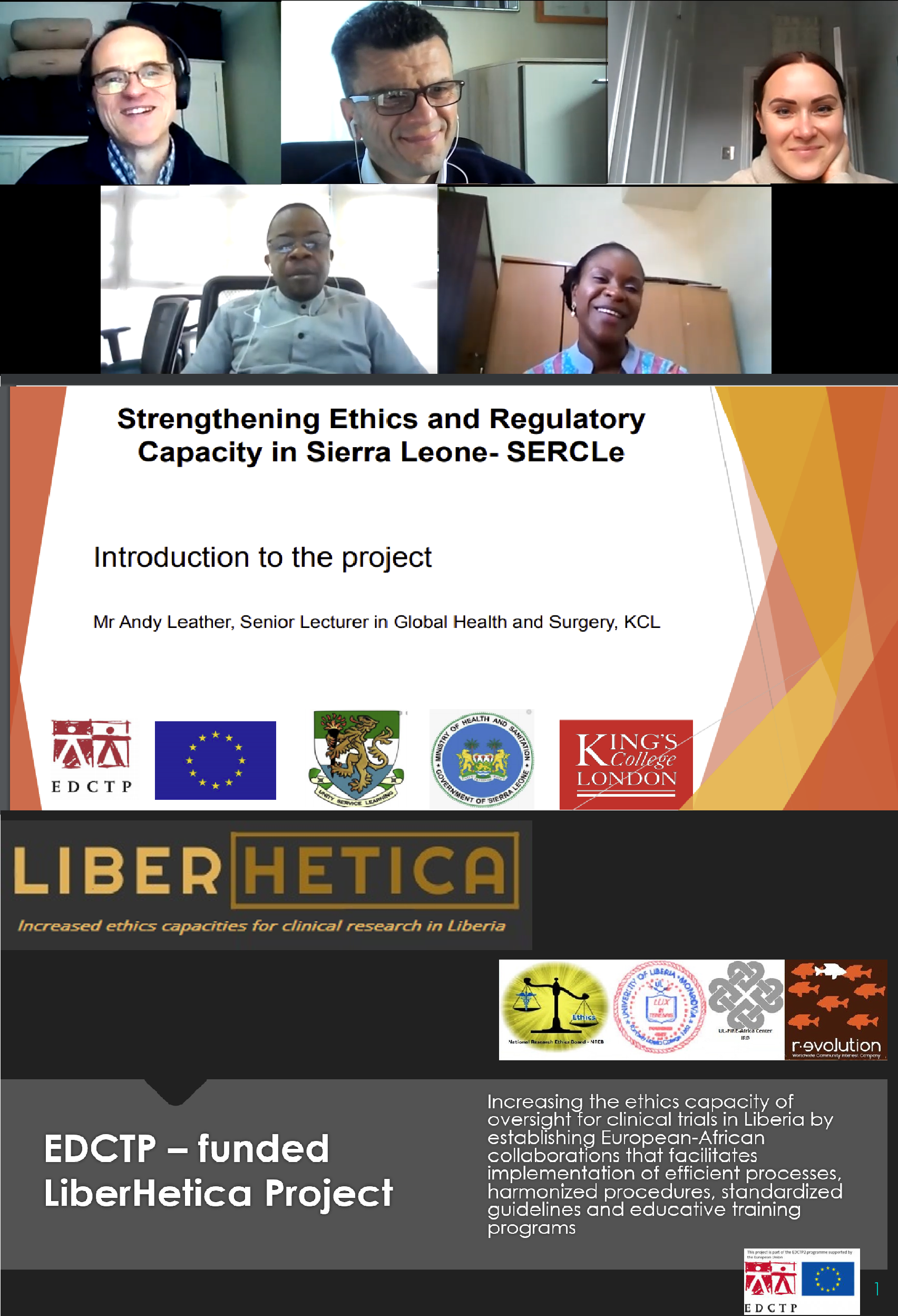 The two EDCTP-funded projects LiberHetica and SERCLe met on 16 April 2021. Both projects primarily aim at strengthening the clinical trials oversight capacity at the ethics institutions, respectively in Liberia and Sierra Leone.

Similarities and complementary differences between projects were discussed and potential synergies were found during the meeting.

The new opportunies of collaboration identified will be developed, with the ultimate goal to further increase the impact of the projects, especially regarding the protection of participants in biomedical research and to promote the safety and efficacy of medicines in development.

The African and European representatives from the EDCTP-funded project LiberHetica and the RegTrain-VaccTrain project lead by Paul Ehrlich Institute (under the Global Health Protection Programme established by the German Federal Ministry of Health) met on 13 April 2021.

The LiberHetica project primarily focuses on strengthening the clinical trials oversight capacity at National Ethics institutions (NREB and UL-PIRE IRB), while RegTrain-VacTrain similarly does so at the National Medicines Authority (LMHRA).

The meeting was a first but very fruitful opportunity of exchanging between different but complementary working groups engaged in improving public health in Liberia.

Potential synergies were succesfully identified during the meeting, which will be developed in order to further increase the impact of the projects, especially in regards to the protection of the participants in biomedical research and to promote the safety and efficacy of developing and circulating medicines. 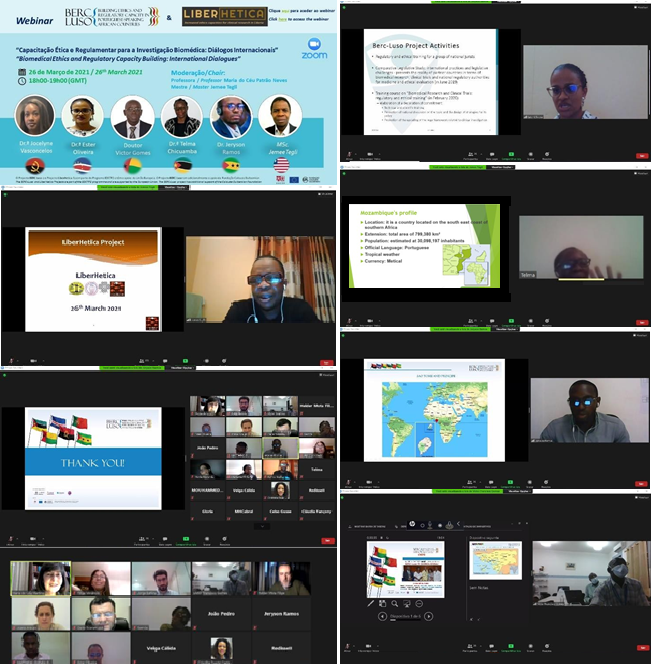 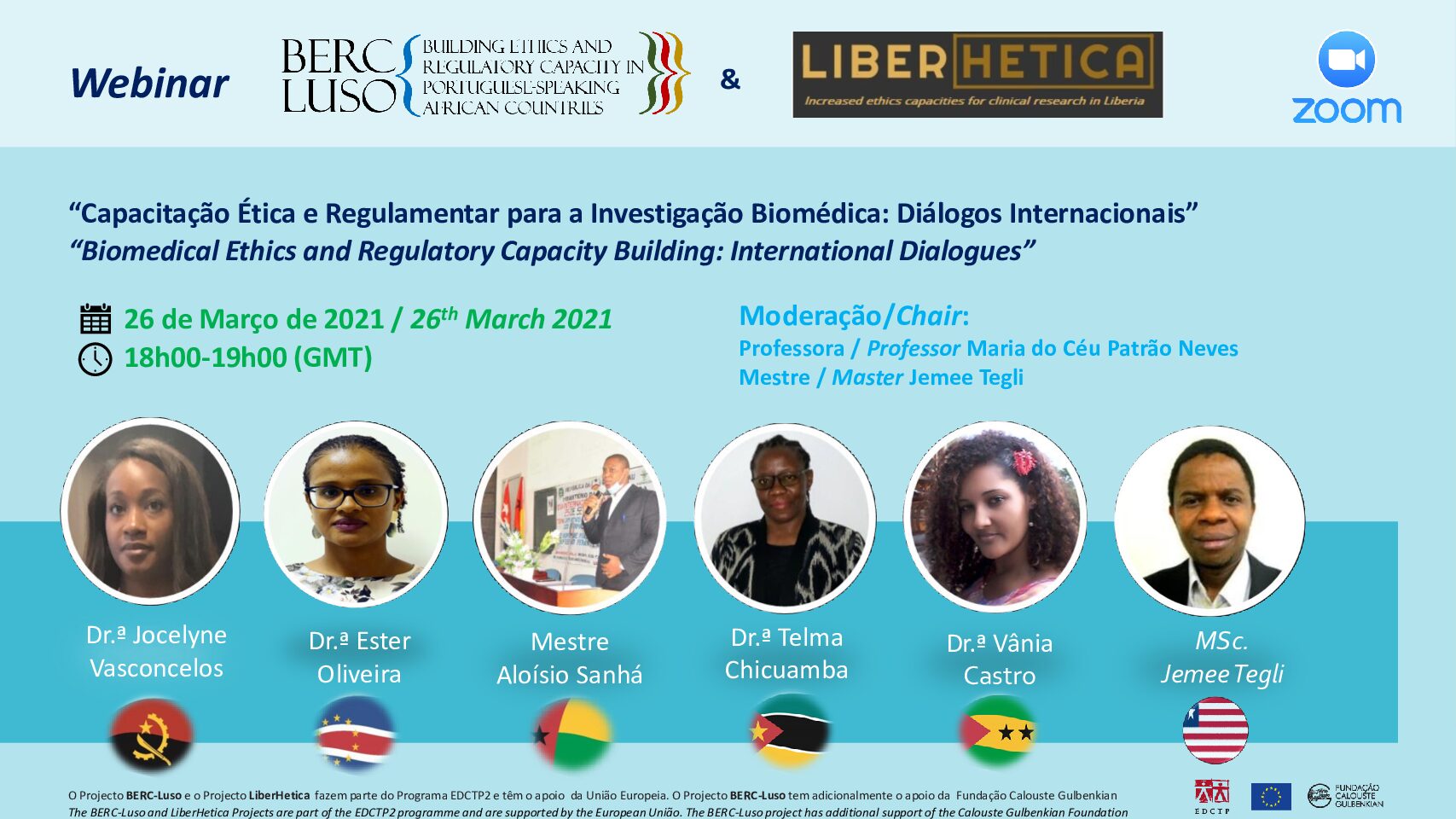 Although one in Africa and the other in Europe, their common passion for ethics of health research involving humans has led them to get to know each other: they are Jemee Tegli (Coordinator in Liberia of the UL-PIRE-IRB and Coordinator also of the EDCTP-funded project LiberEthica) and Prof. Dominique Sprumont (Founder of Institute of Health Law, University of Neuchatel, Switzerland and Coordinator of TRREE).

Their discussions will certainly succeed in strengthening the collaborations between Africa and Europe so that research meets highest standards of ethics and promotes the welfare of participants.

TRREE stands for Training and Resources in Research Ethics Evaluation, and is headed by a consortium of interested persons from Northern and Southern countries. It aims to provide basic training, while building capacities, on the ethics of health research involving humans.

We are proud to have had Jemee Tegli, LiberHetica project and UL-PIRE-IRB Coordinator, invited by the European Network of Research Ethics Committees – EUREC to attend their Annual Meeting. The meeting was well attended by over 30 representatives from across the EU, and Jemee Tegli, the only representative from Africa, gave a presentation about the LiberHetica project, to which followed a questions and answers session.

EUREC is a network that brings together already existing national Research Ethics Committees (RECs) associations, networks or comparable initiatives on the European level. The network promotes capacity building and assistance for local RECs to cooperate in the EU European Research Area. As an umbrella organization the network interlinks European RECs with other bodies relevant in the field of research involving human participants like the European Commission’s ethical review system and the European Medical Association (EMA). EUREC cooperates with organizations that support research ethics.